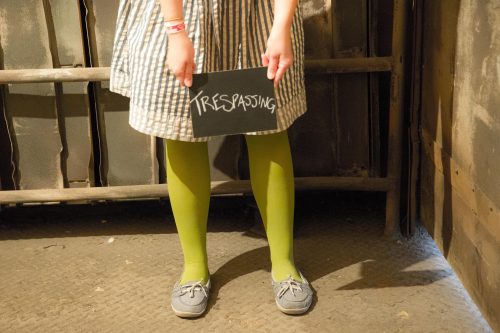 A few years ago, my significant other and I were visiting a friend at a university. There is a very old building on campus that was once upon a time used as a psych ward. The university had reclaimed some of it, but a lot of it was still unused. The exterior still had remnants from the time the courtyard had carvings in the brick of words like JESUS and GOD HELP US. There were splatters of red on the brick and I don’t know if it was someone being clever or if it was blood. Yeah, the building was unusual.

My friend knew there was a certain window that had been propped open so that people could store stuff in the basement. So we climbed through the basement window. When we first got in, it looked like people had been living there. Further down, we found where the university theater must have been storing stuff. There were rooms of just chairs and rooms of silverware and teapots. It was all very, very strange and also eerie.

At a certain point we were like, Look at this silver! There were gobs of it and we were loading up our pockets. Why not? But my significant other was like, Hey, hey, hey, guys. Let’s not do that. It’s one thing to snoop around here, but let’s not take anything.

So we didn’t take anything. But I’m sure my police officer father would have been like, That was illegal, what you just did.

So had we been caught maybe there would have been ramifications.