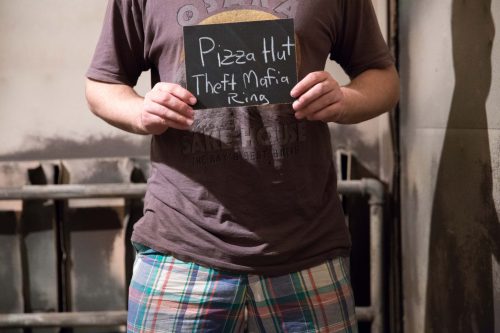 In my early twenties, I worked at a Pizza Hut restaurant. It was my first food service job, and when I started I wanted to do a good job, I wanted to be the best pizza server guy that I could be. I followed the rules, trying to be a great server, and trying to get as many tips as I could. But no one tips at Pizza Hut. They don’t think of it as a tipping restaurant.

I eventually found little ways to make some extra money. Someone would come in to pick up their pizzas and if they didn’t have any coupons I would add the coupons in after they had paid and left. So I would pocket their savings, which was sometimes between seven and fifteen dollars.

I did this quietly for about two months, deathly afraid that I was going to get caught. One day my assistant manager was standing by the register as I was ringing up a bill. It was a perfect order for my little coupon scam. I thought, Ah, he’s standing right there! So I went to cash it out regular and he stopped me. What are you doing? Put a coupon on it. That’s what we do here.

It turns out I was deathly afraid of what they had been doing as a matter of practice the whole time. Awesome. So I started doing it on every order and my tips went from $40 dollars a night to $120, which is kind of amazing, that big of a jump.

After a few months, they introduced me to what they had been doing for years. Once the real manager went home for the night, these guys would “cancel” every other order, pocketing the cash instead of ringing it in. They’d make the pizza, deliver it, and then keep all of the cash. A pure profit of $20, split among everyone.

The best part of it was they had this complicated scam planned out so well.

The day shift cooks would skimp on toppings all day long so that no one would know they were short inventory, and the assistant manager would unload the supply trucks and either grab a couple extra boxes of crusts or claim damaged goods or something. But it was covered from every angle and everyone got a kickback.

I was leaving each night with $200 and claiming $5 in tips on my time card. And that’s how I stole a lot of money from Pizza Hut.

I traded burritos for pizza until we both got caught. Lunch for lunch, no big deal, right? Until she got fired, I got fired and wound up in court. It’s been years, but theft from an employer knocks you out of the running for just about any job. What I want to say is You think I’d risk a paycheck ever again? But there’s no one calling me in for an interview to hear it.