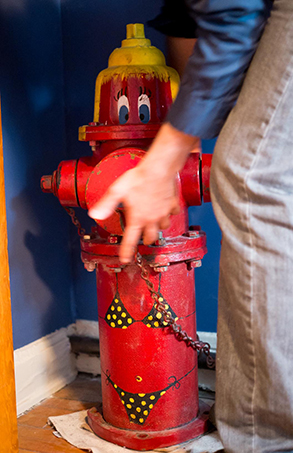 It was a warm summer night, sometime between 1999 and 2001. I don’t remember exactly when. The good people at the city were changing the fire hydrants in my neighborhood. They had left the job half-finished for the night, leaving detached fire hydrants on the boulevard near my apartment.

My roommates and I had been drinking, and through this haze—where many brilliant ideas were born—it was suggested we steal one. Alleviate the city the hassle of disposal, if you will.

We scurried down the street until we found one. It easily weighed 200 pounds so the three of us huddled together to carry it, tripping over each other on the way home. We finally got it into our apartment and promptly and prominently displayed it in the living room. At some point, our neighbors—a few art students—painted it to look like a sunbathing beauty.

When we moved out no one wanted it so it went with me. I’ve moved it to two other homes now, and I think I’ll keep her.

I suppose the fire hydrant wasn’t the only thing I pilfered over the years. Salt and pepper shakers from restaurants, silverware from bars, mugs, pint glasses, and a carafe, road signs (yield, no dumping, Highway 69), banners from light posts like the big canvas Welcome to Our Town banner that I shimmied up the pole to take, a surveyor’s wheel from the back of a truck to measure my walk home.

Inspiration would usually strike on the walk home from a bar. I would bet that there are things I’ve forgotten, picked up at one point, and left behind in the bushes.

I haven’t taken anything in a couple of years (well, except for one thing two weeks ago, but that was an exception). It just got less and less enjoyable. When you start to think of the consequences, the embarrassment of getting caught, it’s no longer funny, just dumb.

I don’t really think of them as crimes, though. I mean, really. Do people get convicted for stuff like this?