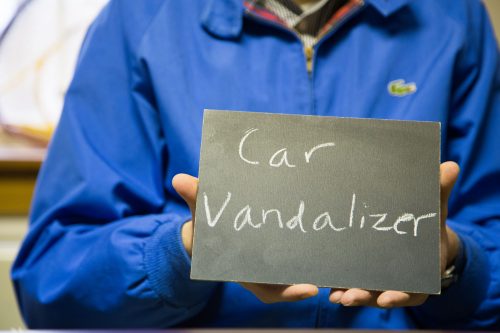 It might be kind of boring… but here goes.

I was 17 or 18, when a friend and I that both played tennis thought it would be funny to prank a teammate’s car. We filled the inside with toilet paper, smashed a couple of eggs on the roof, and wrapped the doors with the cellophane. We then drew a heart on the hood with shaving cream and sprayed, xo – bball girls. To top it off, we stuck a plastic flower from the cafeteria in the heart. I honestly don’t even know why.

We were really giddy till the next week when we overheard him saying that he had told the principal what the girls’ basketball team had done. I guess the shaving cream and egg stripped the paint right off the car.

I felt horribly guilty – not about the damage, but that there were these other people that we had blamed. They had probably been questioned, maybe harassed. No one was ever charged, though.

In my town, police looked the other way a lot. I don’t know if anything would have come of it even if we had been caught.