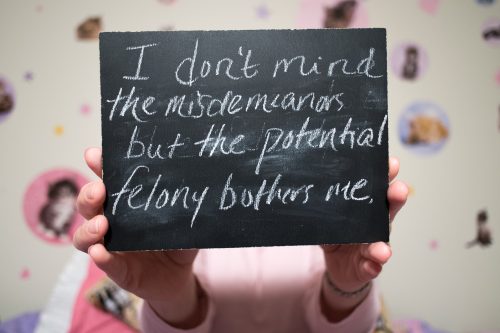 What have I gotten away with? At first, all I could recall was underage drinking, although not a lot of it. But then I thought about it some more, and as I continued to think about it, everything got bigger and bigger.

Reckless driving? Yes. A lot. Marijuana? Yes. Damage to property? Yes. (I drove the getaway car when my friends sawed down the local truck-stop sign.) Did I drink and drive? Well, yes. I don’t think I can come up with exactly how many times, but I’d say somewhere around ten.

Kids do stupid things, and I was no exception.

Perhaps most frightening, though, was something that happened the year after I became a licensed counselor. I had leftover Klonopin and a friend who had difficulty sleeping. I brought the pills over to her house in a little baggie – not even considering that it might be illegal.

I can’t imagine I’d be where I’m at now if I had been caught. I don’t think I’d be here, with this job, with these beautiful daughters, with this beautiful life.

Three pills—that’s it. Three pills in a Ziplock, in a car with a cracked windshield. I got pulled over on my way home from work, again.

After I started working the late shift, it seemed more nights than not I was stopped. Windshield, drifting lanes, failure to signal (I did signal!).

I didn’t think anything of it when the cop asked to search the car. What do I have to hide, right?

Turns out the painkillers from my mom, left over from a surgery, were something to hide. She’d given them to me back in November when my bad back had me doubled over the dinner table. I had popped a few then and kept the rest in the car for an emergency. I’d completely forgotten about them.

I lost my job and it’s been hell finding another. I’m not even thinking about school anymore.

My mom feels horrible, but she didn’t know it would go like this—how could she?