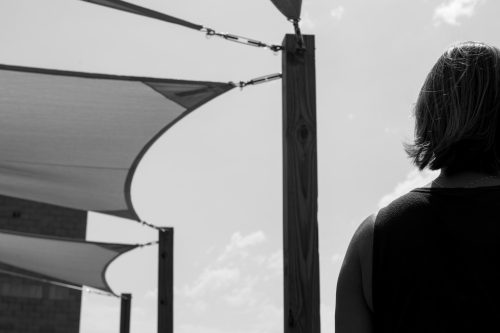 We’ll it’s kind of crazy: I’ve never told anybody about this.

I was 18, living in a city close to the Canadian border, and dating a Canadian. I had a fake ID that said I was 19—the legal drinking age in Canada. So on weekends we’d cross the border to go to bars, and soon we were going to raves. It was the 90s, you know? We dabbled in drugs: pot, mushrooms, ecstasy–the whole rave scene. I would tell myself that because I wasn’t doing the “addictive drugs” that we had been warned of in school like crack, coke, or heroin, I wasn’t really doing anything that bad.

We knew a guy who knew a chemist—and, as it turns out, a manufacturer of pure-grade MDMA. This stuff was amazing. We thought: why aren’t we bringing this back with us?

So my boyfriend and I stuffed condoms with ecstasy and put them in our underwear. We’d pass through border security without issue.

My boyfriend would sell it; I got a $1,000 cut each time—as an 18-year-old, it was all the money I needed for the month. We did it four to five time, maybe. I don’t even remember.

I almost thought I was doing a good thing: people were going to use, we were just helping them use pure.

I was a white young lady from the suburbs; there were so few ‘red flags.’ If I had been black, I think I would have been treated differently. We probably would have been stopped. Can you imagine if I’d been caught? Oh my god, what would I do?

After a while, we split up. My new boyfriend said that if I wanted to be with him, I couldn’t use. So I stopped. I turned my life around, went to college, and now I’m trying to help kids not make the same stupid decisions I did.

I think about it all the time—especially as a mom. Please, for the love of god, let my children be better than me!

So, what do you think? Is it what you thought?

I suppose if I had guessed, I would have said you swiped a pair of jeans.

Oh yeah, I did that too.